You are here: Home / Archives for Paul Lindquist 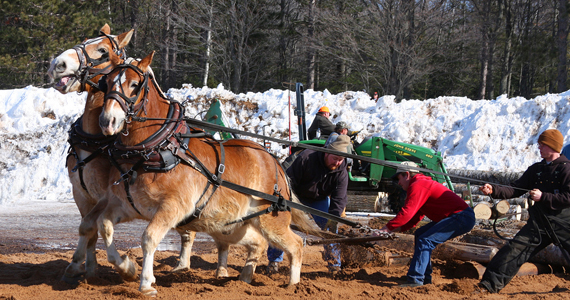 Klondike Days, dubbed “Wisconsin’s #1 winter family fun festival” by the Wisconsin Dept of Tourism, is an annual weekend event held each winter (February or early March) in the Northeastern Wisconsin town of Eagle River. Klondike Days has several unique winter events meant to highlight the traditions and history of the area.

Klondike Days officially kicked off in 1991, completing a decade-long evolution of what began as the Eagle River Freight Dog Race in February 1981. These dog races became increasingly popular during the 1980s, attracting teams from throughout the continental U.S., Canada and Alaska. Major sponsors like Tuffy Dog Food also helped put this event on the map. Because of the popularity and success of the dog run, organizers began discussions about creating additional events like skiing, snow shoeing, tobagoning, and sledding — turning it into an all-around winter festival.

During the late 1980s, organizers were approached with the idea of moving the event into town to create more exposure and to showcase Eagle River’s businesses.  Organizers also believed that when tourists experienced Eagle River’s natural winter beauty, they would want to come back year after year.

With the Eagle River Chamber of Commerce on board, the event was a “go.” One major thing that needed to be decided was the name. The first suggestion was “Ice Fest”. However, local resident John Jasper had a better idea. He told organizers they needed a name that reflected the area’s rich Native American cultural history, as well as the pioneering spirit of the early settlers. He suggested the event be called Klondike Days. Event organizers agreed and adopted the name right away.

The first major sponsor of Klondike Days was local businessman Trig Solberg. Because of his early involvement with the event, many people today refer to it as Trig’s Annual Klondike Days of Eagle River. Moving the event to town turned out to be a big success. Today, as many as 10,000 or more people attend this winter weekend festival annually. Proceeds from the event go to fund college and university scholarships for local high school students, as well as a variety of other projects to improve the area’s infrastructure.

Since Klondike Days began, officials have been steadily evolving and adding new attractions. Today, there are a wide variety of events, attractions and entertainment for everyone in the family to enjoy. Some of the major events include:

Other Klondike Days events include:

For more details on Klondike Days events, dates, times, and other information, go to http://www.klondikedays.org/ 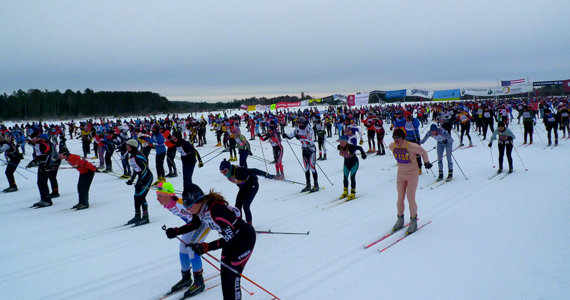 The American Birkebeiner is a 4 day ski event held every February in the Hayward and Cable Wisconsin areas. Though there are several ski races for children and adults of all skill levels, the two main events are the 50k freestyle and 54k classic cross country ski races from Cable to Hayward. Every February since 1973, thousands of skiers from throughout the world have descended upon northern Wisconsin to take part in this race, which is known as the “Birkie.”

Here are some interesting facts about the American Birkebeiner:

For many participants and fans of the American Birkebeiner, it is far more than just a ski race; it’s a way of life. The “Birkie Lifestyle” is marked by a commitment to being healthy and fit year round. While Birkie enthusiasts look forward to the annual thrill and excitement of clicking on the skis and racing with thousands of other like-minded folks from around the world, the race also serves as a test of the overall physical fitness and endurance.
Because of the insatiable hunger from fans for all things Birkie, a whole cottage industry has formed around it, giving enthusiasts countless opportunities to get their Birkie fix well in advance of the next February race. From the Birkie store, you can purchase bells, mugs, posters, T-shirts and other clothing. Fans can also get deeper into the Birkie lifestyle through:

After 2 days of buildup, the American Birkebeiner 50k/54k races start out on Saturday morning at around 8:30 am in Cable, Wisconsin. Skiers in this race are of varying skill levels. Some are in it to win it, while for others the goal is just to finish the race. To keep the skiers thinned out along the course, organizers have them depart in waves of up to a couple hundred each. A new wave departs about every 5 minutes (alternating between freestyle 50k and classic 54k racers) until the final waves are launched around 10:00 am.

The course itself is considered one of the most difficult in the world. The first half of the course has a lot of hills to climb. The highest of these is called Fire Tower Hill. At 1730 feet above sea level, Fire Tower Hill is almost a 400 foot climb from the starting point of the race. The second half of the course has fewer hills, but there are still some challenging sections to conquer.

Completing one of the longest and most difficult ski courses in the world is an adrenaline rush that only a Birkie enthusiast can fully appreciate. Completion of the race is the successful culmination of all the hard work and training that’s been done throughout the year. Time to celebrate for a little while, but before long it’s back to work getting ready for next year. . . 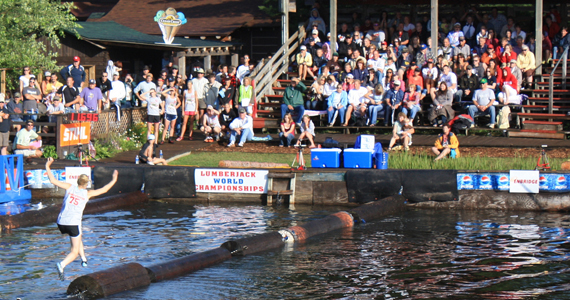 Each July, the town of Hayward, Wisconsin plays host to the toughest and most skilled woodsmen (and women) at the Lumberjack World Championships. Hayward sits in the heart of the great Northwoods, so what better place to bring the world’s best loggers to showcase their talents. The event, which originated in 1960, is held each year in the Lumberjack Bowl (formerly a large log-holding pond for Northern Wisconsin Lumber Company).

When the event started in 1960, lumberjack sports events were few and far between. Over the years and decades, this sport has grown in popularity and today has gained a loyal following of fans from throughout the world.

Competitors in this event are from countries that have a great abundance of woodland, such as the United States, Australia, New Zealand and Canada. Over 100 of the world’s elite loggers compete in a wide range of events such as chopping, sawing, logrolling, and climbing for cash prizes totally more than $50,000.

At the end of the competition, there are two top awards given; the Tony Wise All-Around Champion and the All-Around Lady Jill. The key to winning these awards is a high level of endurance and the ability to compete in as many events as possible. This requires both strength and agility on the part of contestants. Points are awarded for each event and those with the highest cumulative points through all the events receive the awards.

For further information on the Lumberjack World Championships, go to http://www.lumberjackworldchampionships.com 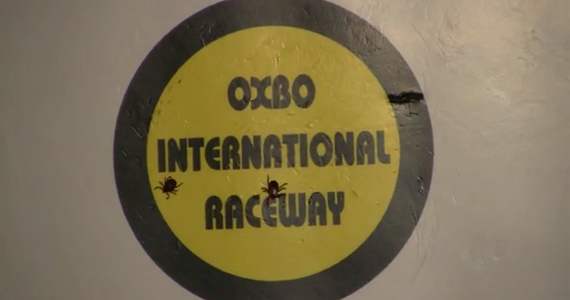