You are here: Home / Archives for Bars 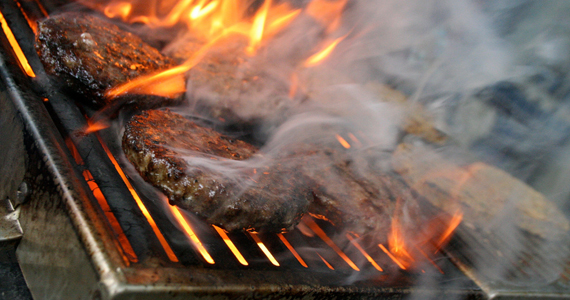 Located at 223 N. Frances St. (a block from the absolutely gorgeous new Kohl Center sports facility), in the midst of Madison’s hustle and bustle, the Nitty-Gritty never disappoints. At least as enjoyable as the excellent fare, is the owner/host, Marsh Shapiro.

A Madison icon, Shapiro, was for years a television personality, hosting a children’s show called “Marshall the Marshal,” and as a TV sports announcer, and basketball broadcaster. This guy has a personality of absolute “diamonds.” Sure, “The Gritty” as it’s called, hosts a constant stream of politicos, sports personalities, sports teams, and insiders from around the world (the walls are festooned with photos, including adults who once appeared on Shapiro’s Marshall the Marshal show as kids) – – BUT, one of the great things about Shapiro, is that he treats everyone – – anyone – – students, seniors, families, whomever, with the same warmth, banter and happy smile as the “more famous.” I like that a lot.

The Gritty (newly renovated and expanded) is housed in a 100 year old former grocery store, and country-western bar. Shapiro has owned and operated it for nearly 30 years.

The Nitty Gritty is most famous as “Madison’s Official Birthday Bar.” On your birthday, you come in with your family or friends and get “freebies,” including a free memento “birthday mug,” which enables the birthday boy or girl to drink free beer or soda all day, balloons, a cake, a loud rendition of the birthday song, and lots of happy banter. Governor Tommy Thompson celebrated his birthday there, a 100+ year old woman celebrated her birthday there, five groups of triplets and one set of quads celebrated their birthdays there. Indeed, Shapiro has hosted nearly 200,000 birthdays at the Gritty. The Gritty has a warm, open ambiance, and bustling that never seems overly noisy or raucous. Laughs, music and sounds sure – -but never obnoxious. So much for ambiance. A T-Rex like me goes there to eat!

Without a doubt, the best sandwiches, salads and soup anywhere – – you’ve got the gritty burger – – big chargrilled burger with special sauce, and an absolutely excellent brick cheese – – my mouth waters. Last time I had the new prime rib sandwich (Shapiro always had a grilled ribeye, but he told me that the quality varied too much, so he dropped it in favor of the prime rib). . . pure heaven! Tender, moist, on a wonderful kaiser roll, I had it with some melted brick cheese and grilled onions, . . .and (I told you I was a T-Rex!), a fantastic vinegar/oil based cole slaw invented by Marsh’s wife Susan, AND ( I told you I was a T-Rex) an order of fries. Fabulous! And then after all was done Marsh brought over the “world’s smallest chocolate sundae” — just the right size, with a cup of excellent joe.

You can get taco salads, Caesar salads, mixed salads, chef’s salads, and big sandwiches of turkey, and ham, and fish, and tuna, and veggies, and cheeses, and a dozen others, and combos of everything, and lots of great appetizers (the mozzarella sticks served with a marinara sauce should not be missed), and oh yes – -the best kosher hot-dog served anywhere – – and they’re big.

Now, while I don’t drink, there’s a wonderful circular bar (separate from the dining area), and a patio, and a second floor being readied as I write this for even more visitors. I did notice that if you can think of a beer, Marsh has got it. Sam Adams, Foster’s, and about 2,000,000 others, including 18 on draught, along with just about any other beverage you’d want.

Cost? Very modest, for the quality and size of the servings. You can get a great sandwich combo, with fries, a pickle and cole slaw for $6-$8.00. There’s also, always, a couple of great soups and chili, to boot.

So the next time you are in-and-about Mad City, stop in at the Gritty. Make sure you meet Marsh – – it’s worth the cost of the meal alone!