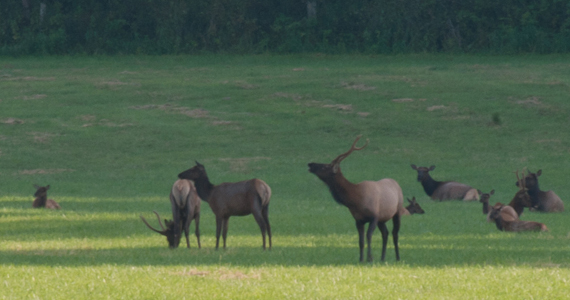 “We are expecting 30 to 35 calves to be born” in late spring and early summer, said Laine Stowell.

The projected population is nearly a five-fold increase over the 25 elk brought in from Michigan in 1995 as an experiment, with the goal of re-establishing a species that was extirpated from the state 130 years ago.

Right now, there are 20 bulls of various ages, and an estimated 40 cows—about a quarter which are heifers and don’t normally breed. About two-fifths of the heifers can become pregnant. “We are observing a 90 percent pregnancy rate among the cows 2 1/2 years or older,” Stowell said.

“Right now, the future looks bright for the Clam Lake elk herd. There’s a lot of public support for the elk” in this area, and from people who want to see elk established elsewhere in Wisconsin, Stowell said.

More than 230 people attended last Saturday’s RMEF Namekagon Valley Chapter banquet and auction at the Country Inn and Suites. The event was a sell-out, with attendees from as far as Madison and Minneapolis.

Since the Wisconsin elk restoration effort first began, the RMEF has put more than $500,000 into it—more than the State of Wisconsin and all other sources combined, said local chapter director Dave Brinkman.

“Without the Rocky Mountain Elk Foundation, there wouldn’t be any elk right now in Wisconsin,” Stowell said.

The management plan approved by the Natural Resources Board last year calls for a natural increase in the Clam Lake elk herd population to the target level of two elk per square mile in a 280-square-mile core area of Chequamegon National Forest centered on Clam Lake. Right now, there’s 1.6 elk per square mile there, Stowell said.

There has been no special accommodation for the elk – no change in forest management and no trail closures – in the core area, he added.

The plan also calls for a target population of 1.5 elk per square mile in the 700-square-mile buffer area, bordered by a hypothetical boundary line running from Seeley to Loretta-Draper, east to Fifield, north to Mellen, to Grand View, and back to Seeley.

“So if you fill that whole area up, you’re talking about 1,500 to 1,600 elk,” Stowell said. There is suitable elk habitat contiguous to that, “so we may expand that core area, depending on the interest of communities in that area.”

If the elk wander to nearby areas such as Washburn and Douglas counties, “the protocol calls for leaving the elk alone as long as the people don’t complain about them,” Stowell said. “The elk will exist wherever we let them exist.”

Some 85 percent of the elk remain in a 45-square-mile area, so “there is a lot of growing room” for that herd, Stowell added.

“In deep snow, the long-legged elk have a lot of mobility and in cold weather they seem to be better insulated even than whitetail deer,” said Stowell. “In severe weather, they will use white cedar cover, but they don’t stay in one place like deer do.

Likewise, the elk move around to feed during every month of the year, Stowell indicated. “We haven’t seen concentrated vegetative damage to date.”

The DNR staff continues to monitor radio-collared elk in the area, as well as make flights to observe them from airplanes. The animals “don’t spend a lot of time feeding” in the grassy openings of the ELF transmission line, Stowell said. They spend just as much time feeding on aspen browse in logged-over areas or brushy areas along streams, he said.

“The Clam Lake area appears to be good range for them, because the population is growing very well,” he added.

The elk “aren’t as attracted to corn as deer are, but the elk are visiting” feed put out by people for deer, such as hay and alfalfa pellets, Stowell said. And they have showed up at bait sites established by bow deer hunters.

However, “these are still wild elk,” Stowell said. “Even with telemetry, these are tough critters to get close to. I think having predator wolves and bears out there keeps them on their toes. The elk don’t have a lot of trust in human beings either.”

Stowell said that an elk calf was found dead on Jan. 23 this year, just a day or two after it expired. A field necropsy revealed that the 100-pound-plus animal was emaciated, and died of malnutrition. Veterinarians in Madison are looking at samples to see if the elk had a high load of intestinal parasites, but that hasn’t been verified, he added.

Since 1995, at least three elk calves have been lost to bear depredation, and three yearlings have been killed by timber wolves, Stowell said.

The cow elk do a good job of protecting their young from marauding wolves, Stowell indicated. The elk who are most vulnerable to wolves are the yearlings who are almost a year old when their mothers abandon them prior to giving birth to another calf.

“Regardless of black bear and wolf predation, we are still seeing about a 30 percent growth in the elk herd” each year, Stowell said.

“We have lost two elk”—-a raghorn bull and a calf—-who were hit by vehicles on Hwy. 77, Stowell added. Unlike deer, “elk don’t dart out in front of vehicles, but when they get it in their mind to cross the road, they will walk across,” he said.

“Every elk that we handle, we take a blood sample from to test for brucellosis, tuberculosis, and other ungulate diseases to make sure that the elk we have out there remain healthy,” he added. “Any elk in close association with (domestic) livestock will be captured or removed.”
Future hunt

Once the elk population reaches the established goals, Wisconsin would have an elk hunt similar to Michigan’s in order to control the numbers, Stowell indicated. Michigan has a hunt during the bugling season in September, and also a hunt in early December.

A limited hunt for expendable bulls—-spike or raghorns who aren’t important breeders—could begin after the Clam Lake herd reaches 150 animals, which is projected in 2003. Any weapon legal for whitetail deer could be used to hunt elk.

“Personally, I would hope we would wait a while before having a hunting season, because it would be work-intensive. But it would depend on public interest,” Stowell added.

Stowell has worked 11 years with the DNR, mostly in wildlife management. He transferred into the newly-created position of elk biologist at Hayward last August.

Terrell Boettcher is a long time reporter and photographer for the Sawyer County Record, the county''s leading source of advertising, news and information for the Hayward, Wisconsin area.