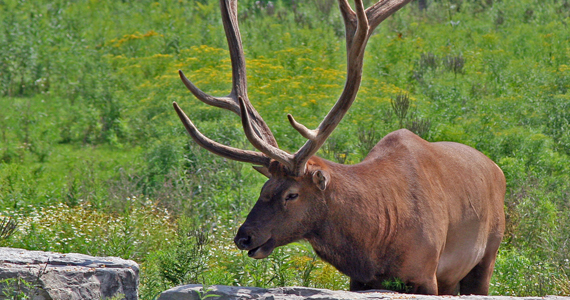 He spent most of the summer of 1998 with yearling bull NO. 32 in the opening adjacent to the release pen. His right spike antler was deformed, probably injured while it was still in the velvet stage. Both of these yearlings were photographed many times by many people and consequently they became conditioned and indifferent to the presence of photographers and to automobiles on Forest Service Road 176. They stayed in this area until 4 January 1999 when No. 31 began a journey north. He was seen frequently for a few days in the vicinity of Cattail Lake and Hy 77 until he continued his trek north. He left the area of the main herd of elk and traveled in a NW direction at a rate of 3.5 to 5.0 miles per day with some brief stops. His route took him very close to Grandview and then north to Mason and 2 miles farther north where he stayed for several days. He was frequently seen in that area and was still indifferent to people and automobiles. On 1 February he moved to a creek bottom within 1/4 mile of Hy 63 where he accidentally died on 3 February.

The mortality mode on his radio-transmitter revealed that something was amiss on that day. He was found dead, late in the afternoon, partially submerged in a small, deep spring with steep banks, near the creek. He was removed and autopsied the following morning. Both hind legs were deeply imbedded in the soft bottom of the spring. This prevented him from climbing out and he ultimately drowned. His windpipe was coated with the fine sediment from the disturbed spring bottom to a point deep into his lungs. The rest of his body organs were in good condition. Samples of these were collected for further analysis in a laboratory.

His summer companion, No.32, has resumed his northward movements after a minor encounter with an automobile on FS 191. His current location is the junction of Snowmobile Trail 9/25 and FS 196. It is normal for some yearling bulls to disperse from their natal areas in a fashion similar to that of the adult bulls who move into bachelor quarters after the fall mating season.