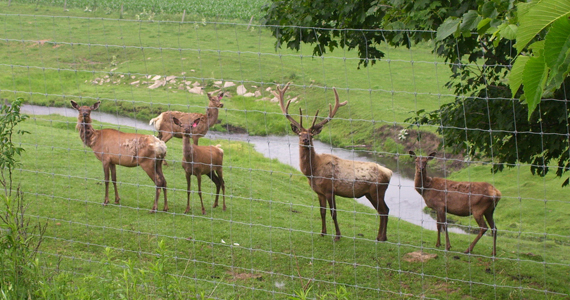 The experimental herd now numbers at least 45 and it is very likely that there are approximately 5 additional elk present. The mild winter of 1997-98 undoubtedly contributed to he high birth rate and excellent physical condition of the calves in 1998. Although additional calf mortality is still possible, calves are now beyond the critical survival stage. The next challenge to their continued existence will come during the winter of 1998-99. At the current rate of growth, and under optimum conditions, the herd could number approximately 500 in12 years.

The main part of the experimental herd, still in the release area near Clam Lake, has occupied only 35 mi2 of the 720-mi2 study area (The Great Divide District of the Chequamegon National Forest).

The rut, or bugling season, began near the third week in September with the first bugle being detected on the 15th. J. Stegeman, a new person on the project as of mid-May, has been monitoring daily movements of the elk to determine their daily behavior patterns throughout the year. His efforts most recently have been directed towards the rut. In general, cows within the major portion of the experimental herd in the vicinity of the release site formed into 2 groups with a single bull attending each. A third 4-year-old bull in the herd (No.19) was clearly subordinate to the other two and spent most of his time alone or on the periphery of the rutting groups which were approximately 2 miles apart. Bugling was sporadic and of low intensity but increased in frequency and intensity whenever Bull 19 appeared. Cows periodically left the breeding groups and returned or, on at least one occasion, joined the other group. The 2 cow-groups eventually were together with the dominant bull by the end of September, which appears to be the end of a relatively brief rut. It appears that all cows were bred during their first estrous cycle but they are still with the dominant bull at this time.

Research Agenda for second half of Year-4: 1) monitor movements and survivorship of the herd with emphasis on the deer hunting season, 2) continue compilation and analysis of data for formulation of management options and guidelines in concert with WDNR Deer Committee, 3) continue project publicity efforts in coordination with RMEF, Elk Wisconsin, USDA-FS, and WDNR in preparation for public review after September 1999.