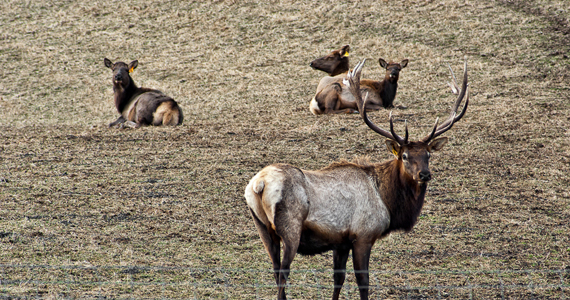 Five elk calves have been born since the first week in June to a herd of elk reintroduced to northwestern Wisconsin two years ago, and seven more calves could be born through the second week in July, according to Ray Anderson, project director and professor emeritus of wildlife at the University of Wisconsin-Stevens Point.

The newborn calves include three bulls and two heifers, he said.

Anderson, along with three college students and volunteers, have placed radio-transmitter collars around the calves’ necks to determine how well they survive.

Except for bark-like warning vocalizations, the mothers of the calves have shown no physical threats to the researchers when placing the radio-transmitter collars on the calves, said Anderson.

“With the new calves, the herd now numbers between 35 and 36 animals,” said Anderson. “Our main focus of research this summer will be to determine the herd production and survivorship of the calves.”

Radio-transmitter collars attached to two wolves and four black bears residing in the area of the herd will assist Anderson and the Wisconsin Department of Natural Resources with monitoring any predation on the adult elk and calves.

“I don’t expect either one of these predators to have an effect on the calves,” said Anderson. “The calves are so large at birth and they are able to move very fast in a short time after being born. Also, the mothers are very protective of their calves.”

Since the herd was released in May of 1995 near Clam Lake, two bulls and one yearling cow have died from natural causes. An adult cow was accidentally shot during the gun deer season in November of 1995.

The herd has remained with two miles of the release site.