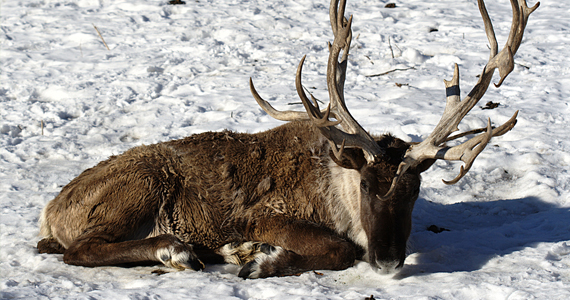 Elk No. 32, a one-year 10-month old bull, died 14 April 1999. He was well known to the local people as the spike-antlered bull associated with snowmobile trail 9, approximately 6 miles north of Clam Lake.

He spent most of the summer of 1998 with yearling bull No. 31 in the opening adjacent to the release pen. Both of these yearlings were photographed many times by many people and consequently they became conditioned and indifferent to the presence of photographers and to automobiles on Forest Service Road 176. They stayed in this area until 4 January 1999 when No. 31 began a journey north and subsequently died from drowning in a spring hole near Mason, Wisconsin, on 3 February 1999.

No. 32 was also on his way north when he was struck by an automobile on 14 January 1999 on FS 191. The injury appeared to be minor at the time. He was monitored daily from that time on. He continued north on snowmobile trail 9/25 and FS 196 where he remained for several days. He was recaptured by project personnel on 10 February 1999 and returned to the release pen south of Clam Lake because he was at risk and posed a hazard to automobile and snowmobile traffic. U.S. Dept. of Navy, ELF and USDA-Forest Service assisted in his recapture and confinement. He remained in the pen until his death.

His carcass was immediately transported to Madison, Wisconsin, where an autopsy was performed in a Wildlife Laboratory by WDNR pathologists. Preliminary reports indicate that cause of death was most likely a product of the automobile collision and the resulting internal gangrenous condition that gradually destroyed the functioning of the lungs, kidney and liver.

Naomi K.Shapiro is an active member of Outdoor Writers Association of America and Wisconsin Outdoor Communicators. She lived for 15 years in Clam Lake, WI (permanent population of 140 not counting deer, bear and elk!) and writes regularly on issues involving business, the outdoors and tourism.