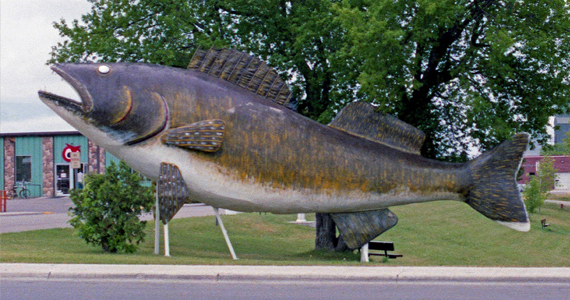 Sportsman’s Lodge and Sportsman’s Oak Island Lodge on the Rainy River and the southern end of Lake of the Woods (Baudette, MN).

On the south end of Lake of the Woods, out of Sportsman’s Lodge, Baudette, MN, the strong walleye bite, including trophies, continues.

This week’s report is short, but VERY “sweet.”

The fishing is spectacular on Lake of the Woods, out of Sportsman’s Lodge. The Lake is settling down as summer begins. The current flow has the walleyes holding in specific areas of 24 to 31 feet of water. Sportsman’s guests are also pulling in good eater sized walleyes with spinners in 12 feet of water at Morris Point. Anchoring and drifting are the methods of choice, with anchoring and jigging a chartreuse/orange jig, bringing in some larger fish.

Most groups of Sportsman’s Lodge guests are catching large numbers of walleye and limiting out within two to three hours on the Lake, then happily play catch-and-release for the rest of the day. One guest caught and released three trophy sized walleyes in two days, while fishing with Sportsman’s guides.

Overall the fishing season has been tremendous, and there’s still the whole summer to enjoy some of the greatest fishing in North America on the south end of Lake of the Woods at Sportsman’s Lodge.

Sportsman’s Lodge provides its guests perfect comfort and safety on its fleet of 27 foot, inboard, fishing charters, which are all equipped with heads and cuddy cabin – -and Sportsman’s believes its guides are the very best anywhere.

(This report based on Creative Brilliance interview with Gregg Hennum, co-owner of Sportsman’s Lodge.)

Fishing Reports compiled and distributed by Creative Brilliance, Copyright © 2008, all rights reserved. These reports may be used and reproduced only by those who receive them directly, or who have received express written permission for their use.