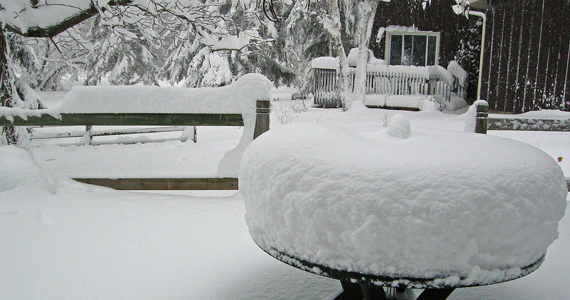 Did you know that ten inches of snow are roughly equal to one inch or rain? You can measure the amount of snowfall with a homemade gauge made from any container that you can mark off in inches or centimeters. A simple but effective gauge can be made from the bottom half of a clear plastic soda bottle, marked with an indelible laundry marker on the outside. Although less reliable because of the way snow drifts, you can also measure snowfall with a yardstick.

Put several gauges outdoors – – near a tree, out in the open, on your front steps — and see if they all measure the same. Are you surprised?

Because winter sports are big business, and inadequate snowfall might be the ruin of an area that attracts skiers and other snow enthusiasts, man-made snow is commonly made to get the season off to a good start. (It is sometimes made throughout the entire winter.)

Most machine-made snow, as it’s called, is made when compressed air and compressed water are combined to create a very dry ice crystal. This “snow” is blown and pushed and packed into place from early November until mid-March at some locations. The machine-made snow is very durable, and while it cannot be made unless the air temperature is at freezing or below, an unexpected rain will not melt it, but instead will soak right down through it.