You are here: Home / Loons / Do Loons Mate for Life? 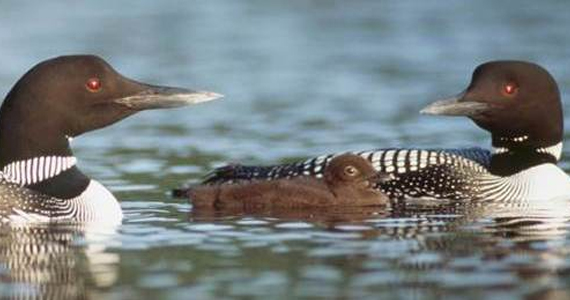 Part 2 of an interview series with Dr. Piper, founder of The Loon Project, a 20 year study of loon behavior in Oneida County, Wisconsin.

NorthernWisconsin.com: When we first talked, you mentioned that scientists have learned a good deal about loons in the past 20 years. What is one of the biggest discoveries?

Dr. Piper:  It took only a year or two to dispel the biggest myth about loons: that they mate for life.

Right away we could see that territory owners – both male and female — face constant pressure to maintain their territories from territorial intruders intent on seizing the territory from them. When an owner loses its territory to an intruder, it usually takes refuge on the nearest loonless lake. Soon, it begins to look for a new territory and mate, which is also likely to be near its original territory. The mate of a displaced loon pairs quickly with the usurper. So loons’ allegiance is clearly more to their territory than to their mate.

People like to think of loons as an example of lifelong fidelity to a breeding partner, and that is a nice image. The truth, revealed by color-banding and careful observation, is that each loon struggles to find and acquire a territory and then recover when it is booted off of that first territory to find a second territory and mate… and a third. It is a very different story from what we thought at first, but maybe even more compelling.

Part 1: Loons Facts or Fiction? An Update From Dr. Piper
Part 2: Do Loons Mate For Life?
Part 3: Male Loons Fight to the Death
Part 4: Loon Banding & How We Track Them
Part 5: Favorite Memories