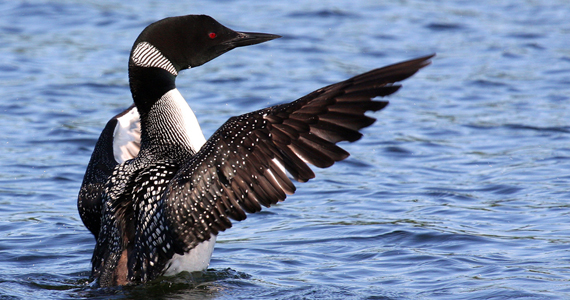 A special note about loons from the Sigurd Olson Environmental Institute, Northland College in Ashland, Wisconsin:

Imagine a northern lake without the haunting, mournful call and stately presence of the common loon. Although still abundant and widespread in most of Alaska and Canada, the common loon’s numbers and range have decreased in the lower 48 states of the U.S. The estimated 15,000 loons in the Upper Great Lakes States of Minnesota, Wisconsin, and Michigan comprise nearly three-quarters of the loon population outside of Alaska.

Research suggests that loon populations in Michigan and Wisconsin have rebounded from drastic declines earlier in this century, and the loon population in Minnesota is still thriving. But many threats remain. Human activities are largely responsible for the disappearance of loons from many lakes.

Development of shorelines and islands for summer homes, campgrounds, and marinas has destroyed traditional nesting areas and other suitable sites. Disturbance of loons, especially during sensitive nesting and chick-rearing periods, can reduce or wipe out loon populations. Pollution of lakes used by nesting loons can lead to accumulations of toxins in eggs and young and the loss of food for chicks and adults.

In 1978, the Sigurd Olson Environmental Institute initiated a loon-conservation program in Wisconsin, and later, a similar program in Minnesota. In 1988, these two loon projects merged into one program known as LoonWatch. LoonWatch focuses its activities in Minnesota and Wisconsin, but its regional scope also covers Michigan and Ontario.

Naomi K.Shapiro is an active member of Outdoor Writers Association of America and Wisconsin Outdoor Communicators. She lived for 15 years in Clam Lake, WI (permanent population of 140 not counting deer, bear and elk!) and writes regularly on issues involving business, the outdoors and tourism.