You are here: Home / Loons / Male Loons Fight to the Death 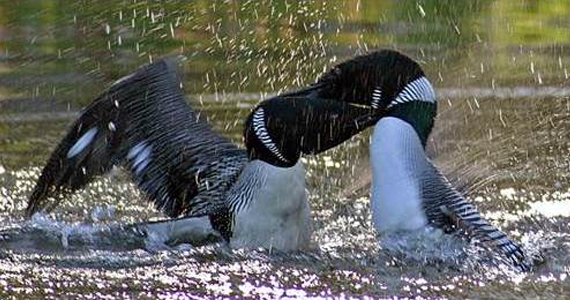 Part 3 of an interview series with Dr. Piper, founder of The Loon Project, a 20 year study of loon behavior in Oneida County, Wisconsin.

NorthernWisconsin.com:  What are some of the other big discoveries you have found through your research in Oneida County, Wisconsin?

Dr. Piper: In the course of our work on territory takeover, we came upon another interesting behavioral pattern: fatal battles among males.

Although it took many years of data collection to confirm the pattern statistically, we have learned that about 1/3 of all male takeovers – when an intruder seizes an owners’ territory – result in the death of the former owner. We do not yet fully understand this behavior pattern.

Both females and males battle viciously for territories. To watch contestants grab each others’ heads with their bills and whack each other repeatedly with their wings, you would expect that both sexes are endangered by the fights. But females almost never fight to the death; somehow a female owner that is being beaten up by an intruder is able to slink off to a protected spot in the lake, rest, and ultimately fly off to another lake nearby to lick her wounds. Not so with many male owners, who become so weakened by repeated beatings that they lose the capacity to defend themselves, cannot find refuge and end up dying on the lake they used to own.

We are puzzled at the inability of male owners to recognize that a battle is going poorly for them and escape a victorious intruder, but we have a clue about why males might fight harder for their territories than females.

After combining information from nest locations, nesting success and identities of breeding pair members ( see loon territory data from The Loon Project), we have learned that male loons, not females, decide where to place the nest. We know this because breeding pairs that consist of a male that has never bred on a territory and a female that has bred there before fail to reuse nest locations where they hatched chicks successfully. In contrast, pairs made up of an experienced male and a new female do “remember” successful nesting sites.

[Image: Courtesy of Dan Salisbury via The Loon Project]