You are here: Home / Archives for Loons 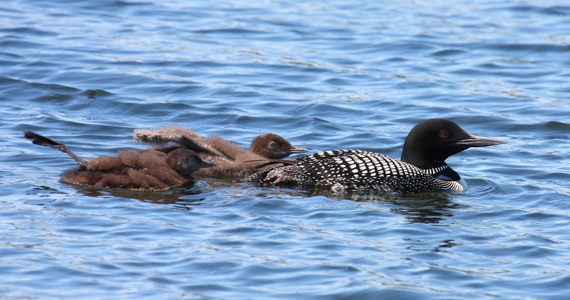 These question-and-answers shed light on the typical behavior of the common loon:

Where do loons go during the winter?
Loons migrate south and east shortly before ice covers the lakes. Exactly where they go is still not fully determined, although it is generally believed loons winter somewhere along the southern Atlantic and Gulf Coasts.

Do loons migrate in flocks?
Yes. In late autumn, generally well before the great freeze, loons congregate on large lakes and fly south together.

How many loons inhabit a lake?
Loons are territorial birds and generally only one pair is found on each lake, except for very large bodies of water where several pairs may inhabit the lake.

What size body of water can support a loon population?
Research conducted by Wisconsin’s LoonWatch Program indicates that loons inhabit bodies of water as small as nine acres.

Why are loons sometimes observed in large gatherings during the summer?
This is a social preparation to migration.

What do loons eat?
Loons feed primarily on fish, frogs, crayfish, mussels, leeches, and aquatic insects. By the end of summer the young fledglings are capable of feeding themselves.

Why are loons observed running across the water?
Because of their large size and weight, loons require about 1/4 mile of lake surface to become airborne and thus appear to run across the water before taking off.

Are loons strong fliers?
Once airborne, loons are powerful fliers. Pilots have checked them flying at speeds up to 80 miles per hour.

How do mates locate each other?
It is assumed that loons return to the same lake every year. Males claim the same territory and await the female’s return.

Why do loons make so many weird calls?
Loon calls have been identified into four classifications: Wail, tremolo, yodel and hoot. The wail is perhaps the call most frequently heard. A loon will wail when it becomes separated from the chick or if its mate fails to return. The tremolo is an aggressive response given when disturbed by a boater or predator. The yodel is also an expression of aggression and is given by the male during a confrontation. The hoot symbolizes a call of curiosity and/or happiness. The sounds are apparently a learned communication between the birds. To hear the richness of their harmonics is clearly a unique experience.

When approached, why do loons sometimes stand up on the water with their wings tacked to their sides, like penguins?
The “penguin dance” is a sign of extreme agitation. This behavior symbolizes that the loon’s territory has been violated. The penguin dance is generally combined with frantic calls and is one of the last defensive actions available to loons. Anyone observing such a response should retreat immediately.

Why do chicks ride on their parents’ backs?
With their young on their backs, the adult loon can provide better protection from predators both above and beneath the water’s surface. This is an opportunity for the young to conserve energy and body heat.